Steven Jackson, Respiratory Physiotherapist at Leicestershire Partnership NHS Trust, talks us through the benefits and challenges of running an integrated rehab service for COPD and heart failure patients. This exciting new service won an innovation award within the trust! 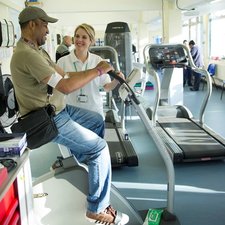 I must admit that when we first discussed the prospect of trialling integrated rehabilitation at Loughborough I was filled with anticipation, because to my knowledge, it had never been done before. However, on reflection we were in fact in the best position to start.

From a patient perspective, traditionally our COPD and CHF (Chronic Heart Failure) rehabilitation classes had run separately. However, we knew that patients with COPD and CHF experienced similar symptoms of breathlessness and fatigue with other potential co-morbidities. We were also aware of the growing waiting list and pressures on the University Hospitals of Leicester NHS Trust heart failure team for county and city patients.

Looking at our rehabilitation team, we had grown over the last three years and collectively had a good background of experience and knowledge that would equip us well to work with more complex patients. Consequently, a pilot period of 12 months was approved and integrated rehabilitation classes started at Loughborough, and then followed at Measham and Hinckley.

The first class at Loughborough was, as predicted, a steep learning curve. The biggest challenge during this class was explaining to the CHF patients that they would need to work at a different RPE and Borg breathless scale compared with our COPD patients. This was very much a ‘condition-specific’ approach (Man et al. 2016).

The ACPICR (2015) suggest exercising cardiac patients between 11-14 Borg RPE, whereas BTS (2013) suggest COPD patients exercise at Borg RPE 13-15. Unfortunately, we found no specific guidelines to suggest the recommended Borg RPE for patients with CHF. During the baseline shuttle walk tests we had found that we had to stop patients once they had exceeded RPE 14. At this point most were neither fatigued nor breathless to an extremity that warranted terminating the tests.

This had implications for the exercise intensity recommended during the initial classes. Furthermore, confusion was caused during the first class in the attempt to explain in laymen terms that we wanted our CHF patients to work at a different intensity range compared to our COPD patients.

In organisational terms, small logistical issues such as having two projectors, adaptors, and two suitable separate rooms for the education sessions, proved that any integrated program requires good planning and organisation. Even preparing for the worst case scenario that the external speakers may forget their presentation so having a back-up copy at the ready!

We had also found that differentiating patients between CHF and COPD was also challenging despite our class register. A later team reflection had suggested that for future classes we use small coloured stickers (red or blue) on patients name badges.

Man et al. (2016) suggested using a ‘patient-focused’ approach in integrated rehabilitation. We trailed this in our walk tests and encouraged CHF patients to work to their individual limits (breathlessness and fatigue) during the shuttle walk tests which appeared to yield a greater frequency of clinical important improvements over the year. We also started to use a standardised RPE between our CHF and COPD patients i.e. 13-15 which was adopted more easily by our groups.

In summary, as a result of our experience in the first weeks of integrated rehabilitation, we would recommend use of a ‘patient-focused’ approach as suggested by Man et al. However, we have concluded that there appears little specific guidance on heart failure rehabilitation in physiotherapy which is an area that must be developed as rehabilitation teams nationally look to develop services.