Mouthpiece ventilation: time to seize the day, for daytime NIV? 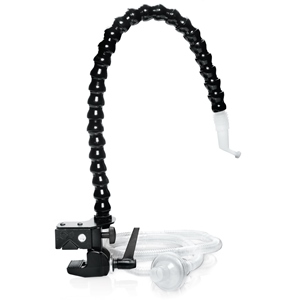 Mouthpiece delivery of non-invasive ventilation (NIV) has been described as an ‘old and underutilised technique’ (Shou and Bach, 2016), with documented patient use dating back to the 1950’s.

The ability to provide NIV through a mouthpiece or straw attachment might be expected to liberate ventilation users from traditional oral or nasal interfaces, where daytime NIV is needed. Recent review of the evidence for mouthpiece ventilation (MPV) revealed many reports of effective application, mainly amongst neuromuscular disease patients requiring support during the day in addition to standard NIV overnight (Garuti et al, 2014). At that time it was found that MPV was not commonly being used – however since then, dedicated circuit accessories and programmable mouthpiece modes of ventilation have become widely available within standard UK devices.

Within our home ventilation and weaning service at Aintree Hospital, we wanted to offer this option to our patients – many of whom have a neuromuscular diagnosis, or require daytime ventilation. Our first patient to try MPV was a 53-year-old female with spinal muscular atrophy, who presented acutely in decompensated respiratory failure on a background of 7 years of nocturnal NIV use. After improving as an inpatient with continuous face-mask NIV, a return to the patient’s preferred nasal interface and chinstrap posed a problem of persistent hypercapnia. Scheduled periods of daytime nasal NIV gave inadequate control of ventilatory failure once home, and proved restrictive of social activities – negatively affecting quality of life. A trial of on-demand MPV for daytime use began.

Outpatient review after one month found MPV to be well tolerated, and effective; improvements were seen in arterial blood gases and on patient-ventilator interaction data. Most importantly, MPV was readily incorporated into normal daytime activities and maximised independence. The patient has reported great satisfaction with MPV since then, and we decided to share the case as a report in the BMJ to highlight the ease with which this method can now be applied (Ward et al, 2015). To date, our patient continues to use NIV day and night - with MPV for over 3 years.

Since May 2014, we have trialled daytime MPV with 23 patients of varying diagnosis – muscular dystrophies, motor neurone disease, and kyphoscoliosis. Within this group, 16/23 patients found MPV helpful and chose to continue it. Of the 7/23 patients who decided not to adopt MPV, 6/7 were more than 20h/day ventilator dependent at time of MPV trial and/or had difficulty maintaining adequate lip-seal; these patients reported a sense of MPV offering less secure ventilation than traditional mask, returning exclusively to their preferred interface. We therefore aim to consider MPV as a treatment option at the time of identifying the need for daytime ventilatory support, with the hope to give patients the best chance of acclimatisation.

Amongst our MPV users, 3 individuals have been able to continue working and they attribute this to the effectiveness of mouthpiece daytime ventilation; many others have reported feeling less self-conscious in public compared with NIV via mask interface. In one case so far, successful mouthpiece ventilation avoided elective tracheostomy ventilation; for these reasons and more, we feel it is time to seize the day with MPV and urge other ventilation services to do the same.